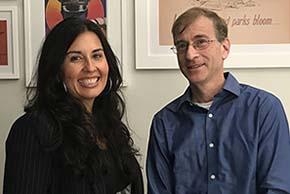 G. Cristina Mora completed her B.A. in Sociology at UC Berkeley in 2003 and earned her PhD in Sociology from Princeton University in 2009. Before returning to Cal, she was a Provost Postdoctoral Scholar in Sociology at the University of Chicago. Professor Mora’s research focuses mainly on questions of racial and ethnic categorization, organizations, and immigration. Her book, Making Hispanics, was published in 2014 by the University of Chicago Press and provides a socio-historical account of the rise of the “Hispanic/Latino” panethnic category in the United States. This work, along with related articles, has received wide recognition, including the 2010 Best Dissertation Award and the 2018 Early Career Award (SREM) from the American Sociological Association. In July 2019 she was appointed Interim Co-Director of IGS along with Eric Schickler.

Eric Schickler is Jeffrey & Ashley McDermott Professor of Political Science at the University of California, Berkeley. He is the author of three books which have won the Richard F. Fenno, Jr. Prize for the best book on legislative politics: Disjointed Pluralism: Institutional Innovation and the Development of the U.S. Congress (2001), Filibuster: Obstruction and Lawmaking in the United States Senate (2006, with Gregory Wawro), and Investigating the President: Congressional Checks on Presidential Power (2016, with Douglas Kriner; also winner of the Richard E. Neustadt Prize for the best book on executive politics).  His book, Racial Realignment: The Transformation of American Liberalism, 1932-1965, was the winner of the Woodrow Wilson Prize for the best book on government, politics or international affairs published in 2016, and is co-winner of the J. David Greenstone Prize for the best book in history and politics from the previous two calendar years. He is also the co-author of Partisan Hearts and Minds, which was published in 2002. He has authored or co-authored articles in the American Political Science Review, American Journal of Political Science, Legislative Studies Quarterly, Comparative Political Studies, Polity, Public Opinion Quarterly, and Social Science History. His research and teaching interests are in the areas of American politics, the U.S. Congress, rational choice theory, American political development, and public opinion. In July 2019 he was appointed Interim Co-Director of IGS along with Cristina Mora.

Executive Director of IGS, and Director of the Robert T. Matsui Center for Politics & Public Service
Institute of Governmental Studies

Christine Trost received a Ph.D. in political science from UC Berkeley and spent much of her graduate career at IGS, sharing a carrel, attending afternoon tea, and working as a research assistant. After completing her degree, she taught courses in American politics at UC Berkeley and Mills College, and was Director of Research and Training...

Alexandria Wright received her Ph.D. in Rhetoric from UC Berkeley, with a research focus in phenomenology, aesthetics, and American cultural production. She also earned a designated emphasis in Gender, Women, and Sexuality. Prior to graduate school, she served as the Media Field Strategist for the east coast with GLAAD and as a facilitator with StoryCorps,...

Dawn Geddes is the Administrative Manager at the Institute of Governmental Studies.  After studying English literature with a focus on Britain between the world wars, Dawn designed and managed wardrobe for theater and television, worked as a fiction editor, and produced and managed prominent e-commerce websites. She joined UC Berkeley in 2007 and IGS in...

Sonia Moctezuma is the Program Manager at the Institute of Governmental Studies. Her duties include advising and promoting programs to students, including the Synar and Percy awards, Democracy Camp, the Howard Prize in American Politics Research, and the Muir Award in Leadership. She also helps in planning public education events sponsored by the Matsui Center...

Julie Lefevre has been the Digital Services Librarian at IGS since 2009, managing the Institute's website and the library's digital collections. Since 2018, she has also managed day-to-day operations as the library director. She holds a Master of Library and Information Science from San Jose State University, a Master of Arts in Liberal Arts from...

Paul King is the Circulation Supervisor and PPIC Coordinator for the Institute of Governmental Studies Library. In addition, he serves as reference staff and a technical services professional. Paul studied political science at Evergreen College in Olympia, WA.